was good for the camping WOW! We had two private nights at different locations. First one was in eastern Carson National Forrest, at Comales. 7,300ft and had to wear jackets at night. 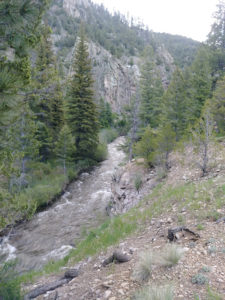 Had a beautiful campfire with very dry wood that was left behind, so kind to pay it forward – thank you campers!  Price was good here at $11/night on a river with great views, only one other camper pulled in after we went to sleep that night and left before we awoke.  We woke at 4am got out of van and looked at the stars.  We saw at least 6 satalites moving thru the sky in different directions. I told Tana this would be where we would see UFO’s so we watched the sky and when got sleepy went back in van. I was also having strong feeling’s of Forrest Fenn’s Treasure, so we looked at the map and the poem and were inspired to spend the next morning looking over some of the notes we had made on past journeys.  We made our first coffee that AM and was not right so set off for next destination.  Then explored the city of Taos. After their Sunday music festival which we did not go see, the city was a bit sleepy in the morning after that show for a Monday morning but so many Artist Museums and shops and adobe buildings, it really was beautiful.

The breakfast was beautiful and it gave us left-overs from ordering Breakfast burritos with potatos. Next we drove over the gorge of the Rio Grande River and Canyon and stopped at a local brewery Taos Mesa Brewing Co.

that we thought had pool tables from old pics on their web site, but they did not so we drove on to find another camp site.