We continued on our journey to the West on Saturday morning June 3rd.

We stopped in Amarillo TX on June 3rd and ate at a steak house called Hoffbrau Steak & Grill House on old route 66. Very cool retro-route to take. The food was very good.

We then went to the downtown after our smoked steak and salads to see a band called “Flobots and Quaballa (beautiful lady rapper from Portland OR) at Leftwood’s. 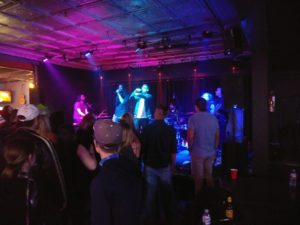 It was only $15/person to get in and great IPA’s to drink plus a pool table where we played our 2 outa 3 game.  Leftwood’s reminded us of the Buhdda in Fort Myers, and the bathrooms were just as dirty…lol.  Leftwood’s was on the corner in downtown that had entertainment and food places like Broken Spoke, and others too many to name.

In the morning we woke up in the parking lot of Denny’s after having late night breakfast there. We re-grouped and went to Starbucks then The Donut Stop

(not the same company as the one in St. Louis but very good).