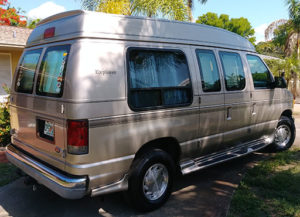 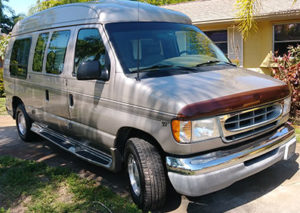 In March of 2013 we found this 2002 Ford E-150 Explorer HiTop Conversion Van for sale for $8500. It had 80,000 miles and it appeared in very good condition aside from the fact that the rear air and the electric sofa bed seat did not work. I took it to my mechanic Auto Air and Electric and had it inspected and it was revealed that the under carriage was in “like new condition” and it had a 4.6 liter 225hp engine and several items that I thought would be very useful for us. It had:

Hitch and trailer light set up

Although we had not planned on towing a trailer I felt that these “extras” would be good to have while we travel through the hot areas of the USA. It also looked as if the tires were “new”. On test drives the van swayed quite a bit and behaved as is the tires needed balancing. During the inspection, it seemed it would need about $1500-2000 worth of work not including the seat repair that I would attempt myself. I went back to the dealer and offered $6500 cash.

The dealer countered with $7800 and would not budge. I walked away. I pondered the deal and continued looking for a van. I found a few around the $6500 range but they did not have the “extras” that I thought might come in handy. Several days later I drove by the car lot and saw the van still there. I consulted my wife and we agreed to offer $7500 cash.  Although hesitant the dealer accepted and we purchased the van.  We immediately dropped it off for the necessary repairs and I started considering the repair of the rear sofa bed. (See sofa bed repair).

After the repairs were completed we set out to "customize" the interior for travel (See the interior design).

So, as I mentioned, the sofa bed had a mechanical problem and would not open fully.  I took the seat out of the van an inspected the motor and gears that make the sofa convert into a bed.  Upon inspection, the motor was working but one of the two gear screws were bent dramatically.  I took the bent one off and attempted to bend it back but could not make it straight enough to make it work properly without putting a strain on the electric motor.  I then went on to the internet to see if I could find the conversion company Explorer and see if I could order replacement parts.  I got lucky and found them but they had gone under an ownership change and they were not sure if they had replacement gears.  After some searching they were able to find the gear screw and I bought two of them for $50.  They also included and new motor and gear cable in my shipment. WOW, how lucky is that. I replaced the parts and viola the sofa worked.  I could see that the design wasn’t perfect and that I need to be cautious when converting the sofa into the bed.  I could be easy to have an obstruction and cause the gear screws to be bent again. So, for $50, shipping and a 3-4hrs I repaired the sofa bed.

At the end of the day I didn’t really need to repair the sofa bed because I was going to remove the second-row seats as well as the sofa bed and replace them with my bed frame anyway.  But from time to time I thought I might want to use the sofa bed for short trips, and I did.